As a teenager the majority of books classified as Young Adult (YA) passed me by. Other than reading a few Point Horror books and the necessary ‘coming-of-age’ Judy Blume novel when I was a pre-teen, I recall making a relatively swift transition from Nancy Drew to Jane Eyre (with a few Mills and Boon pit-stops along the way, courtesy of my uncle’s girlfriend!). Once I had entered the vast realm of adult fiction, I saw no reason to go back, and consequently, I have since realised, probably missed out on some amazing pieces of literature for young people.

Since working with teenagers I’ve made a distinct effort to return to the world of YA fiction and have, on the whole, been pretty impressed with it. So when a secondary school teacher I know recommended Annabel Pitcher’s My Sister Lives on the Mantelpiece I decided to give it a try. Entirely different to the sensationalist fiction of Darren Shan or Stephenie Meyer (which is good in its own right), I was completely blown away by how candid and poignant it was.

Exploring the effects of loss on a 10 year old boy and his family in the years after his sister is blown up by terrorists, My Sister Lives on the Mantelpiece tackles a difficult subject in a sensitive yet not overly saccharine way. From the opening paragraph, it is apparent that the death of Rose, Jamie’s older sister, has cast an irrevocable shadow over the family, yet Jamie, the narrator throughout, remains detached from the grief that consumes his mother, father, and Rose’s twin sister, Jasmine. Although his dad cannot bear to spread his daughter’s ashes, instead keeping them in an urn on the mantelpiece, Jamie fails to even remember his older sister. Whilst his family disintegrates under the weight of grief, poor Jamie struggles to make sense of a loss that he can never fully understand. .

Delving into a multitude of issues relevant to life in modern Britain- from racism to alcoholism and single parent families- Pitcher’s debut novel reflects just how devastating an impact death can have not only on family life, but also on a child’s mental and emotional wellbeing. Uprooted and not properly cared for, Jamie has to contend with issues of bullying and loneliness in silence as the rest of his family become increasingly absorbed in their misery. Anyone who has ever worked with children will have met a ‘Jamie’ before- a child who arrives at school in the same dirty clothes every day; someone who is never included, no matter how hard he tries; a person who tells elaborate tales or simply remains silent as a means of hiding the reality of his home life. The sad fact is, Pitcher’s fictional story is a brutally honest account of what happens when grief takes over.

Beyond the sadness, there are moments of light relief that will keep younger readers entertained, particularly the parts involving tricks played on Jamie’s new teacher- a seemingly uncaring woman who is almost as horrible to him as his classmates are. The heart-warming friendship that blossoms between Jamie and fellow outcast Sunya, a kind Muslim girl, is also cause for cheer, so it’s not all doom and gloom.

What most struck me about My Sister Lives on the Mantelpiece was the way that, despite being labelled Young Adult fiction, it is just as relevant to an adult as to a teenager. The universal nature of death means that we all have to suffer the consequences of grief at some point, yet being an adult does not always prepare you for it any better than a child. Besides being infused with warmth and a welcome sense of reality, the book reminds us that there is no specific formula for grief- we all deal with things differently, we all make mistakes, and, ultimately, we are all just human.

This novel had me in tears at various stages, which, let’s face it, isn’t hard (as regular readers have probably noticed, this has become a frequent occurrence through this challenge!). I’m pretty certain that I’m not the only person to ever cry at My Sister Lives on the Mantelpiece though- in fact, I’d defy anyone NOT to get a little glassy-eyed at it! If you’re an animal lover be prepared for some serious sobbing however- a box of tissues might well be necessary. You have been warned! 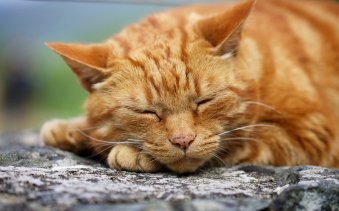